what's the largest UK pound note? not the £50, not even the "one million pound note": 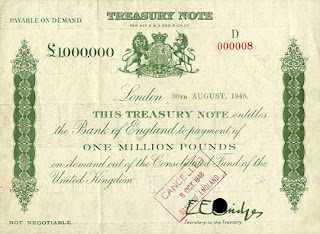 no, it's the amazing "one hundred million pound note"!


Within the United Kingdom, banknotes are also issued by three note-issuing banks in Scotland and by four in Northern Ireland.


These note issues have to be backed pound for pound by Bank of England notes. Owing to the combined size of these issues – well over a billion pounds – it would be cumbersome for the Bank to hold ordinary Bank of England notes as cover. Instead, special one million and one hundred million pound notes - known as Giants and Titans - are used. These notes are not for general circulation. Jersey, Guernsey and the Isle of Man are not part of the United Kingdom and are responsible for issuing their own notes