Have released the first version of the map, its limited to just new malden and is still using a simple drawing plug-in.

You can play with it by clicking on the picture: 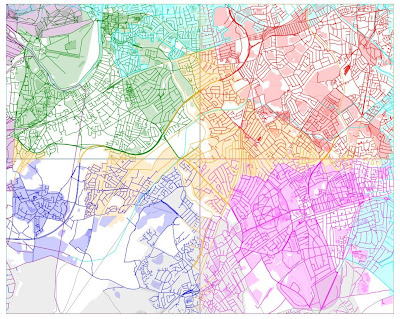 Its a very simple update from what I've been working with, but I spent most of the day fighting DNS, FTP, Visual Studio and my own stupidity ;-( However it now shows/does a number of things:

Its all debug code, and we probably won't ever show tiles at this size and detail (i.e there's too much detail at this level of zoom). However there is certainly work to be done on improving the general speed of drawing...
at 3:34 PM
Labels: OpenStreetMap, project cobalt, Silverlight

Looks good, I'd try it out if only my computer was compatible with silverlight! (Linux user here, and too lazy to pop up a VM!)

Regards from the next borough over (Sutton)

SilverLight .. humm. This means that OpenStreetMap will be closed to all Linux users!
I run Linux and do not have any Windows OS also not in an VM ... ;-(

Silverlight is a microsoft product, my understanding is that it is cross platform:

"Which platforms and browsers will Silverlight 2 support?
Silverlight will support all major browsers on both Mac OS X, Linux and on Windows. Particular care is being taken to account for differences in platform and browser capabilities to ensure a consistent experience including experiences on Firefox, Safari, and Internet Explorer."

it seems to work in chrome etc, though I'm sure there will always be some things that have to be handled differently (especially with javascript integration)

also I doubt you are going to be forced to used my little project instead of one of the other renderers ;-)