So I've been progressing quite quickly with the OSM data, I'm currently using the UK data set to trial stuff for a number of reasons - the biggest one being that for some reason I can't successfully unzip the full data set *grr* (I suspect this is my PC rather than anything else)

I've written a data store for project cobalt that allows me to restructure the OSM data into a format more suitable for realtime map generation - I'm calling it a QuadStore as its a geographically clustered XML data model and GCXDM does not sounds as good.

Throwing all 1.2gb of the UK data generates a QuadStore of 365mb which is a compression I get for free due to losing duplicated data in the OSM model. I'm also ignoring OSM "relationship" data at the moment as a) I don't know what it means yet b) I'm having to much fun with just "ways".

I've then updated the silverlight proof of concept to use the QuadStore via a webservice - this seriously kicks ass in performance terms (and the proof of concept just did not scale for multi tile retrieval). Using the QuadStore means that tile filling is 1 (yes) one cost - O(1) rather than O(n) where n=number of points in tile. 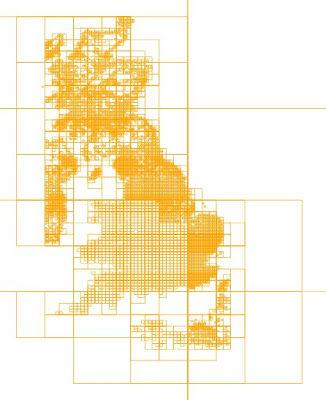 There's quite a bit of performance to be gained from the webservice, for example by compressing the stream (though compressed streams are not available in silverlight). And also from returning multiple tiles per call rather than one at a time.

So the next step is to change the silverlight UI to manage tiles correctly, once it does this I will release a working version. One of the nice features I should be able to deliver is being able to rotate the map...
at 5:54 PM
Labels: big-oh, OpenStreetMap, project cobalt, Silverlight